Skip to content
I like good cigars. Who doesn’t? The problem is that good cigars usually cost a good amount of cash. Keeping the humidor stocked when the weather in Texas isn’t surface-of-the-sun-hot is tougher than usual, so I’ve been looking for solid options of a less expensive variety. When I found a brand of cigar available for less than a tenth of my usual afternoon smoke, I was intrigued (and incredulous) so I took a bundle home to test them out myself.

J. C. Newman is an American cigar company that was founded by the eponymous Hungarian immigrant in 1895. Originally founded in a place not very well known for cigars — Cleveland, Ohio — the company moved to the Ybor City area of Tampa, Florida, in 1954 to be closer to their Cuban suppliers. When the Cuban embargo began just four years later they branched out and now source their product form Nicaragua, the Dominican Republic, and the United States. Today, in addition to producing their own line of cigars, J. C. Newman is the worldwide distributor for Arturo Fuente cigars (with the exception of Western Europe). Their most well known house brand is Diamond Crown. 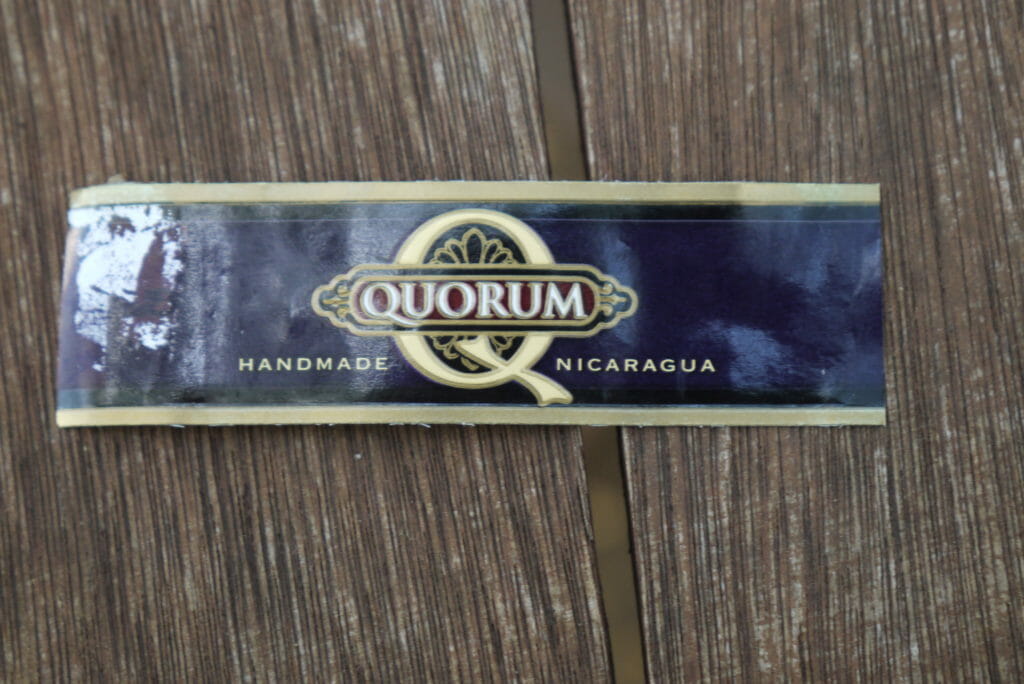 The Quorum brand of cigars comes in a handful of sub varieties, but the original version (reviewed here) is marketed as a medium bodied cigar. Made by hand from a Nicaraguan filler and binder with a Ecuadorian wrapper, the cigar is available in the usual sizes (Robusto, Torpedo, Churchill, Corona, Petit Corona, and even a Double Gordo). Reviewed here is the Robusto version. The branding isn’t the most spectacular thing you’ve ever seen. The band is a plain square design with no embossing or any other embellishments. The printing on the band isn’t very sharp — the blurriness you see in the above picture isn’t from the camera, I can tell you that. And the budget-minded choices continue with the fact that these are only available in cellophane wrapped bundles, not any kind of box. There’s no doubt that you’re paying for the cigar, not the fancy wrapping. 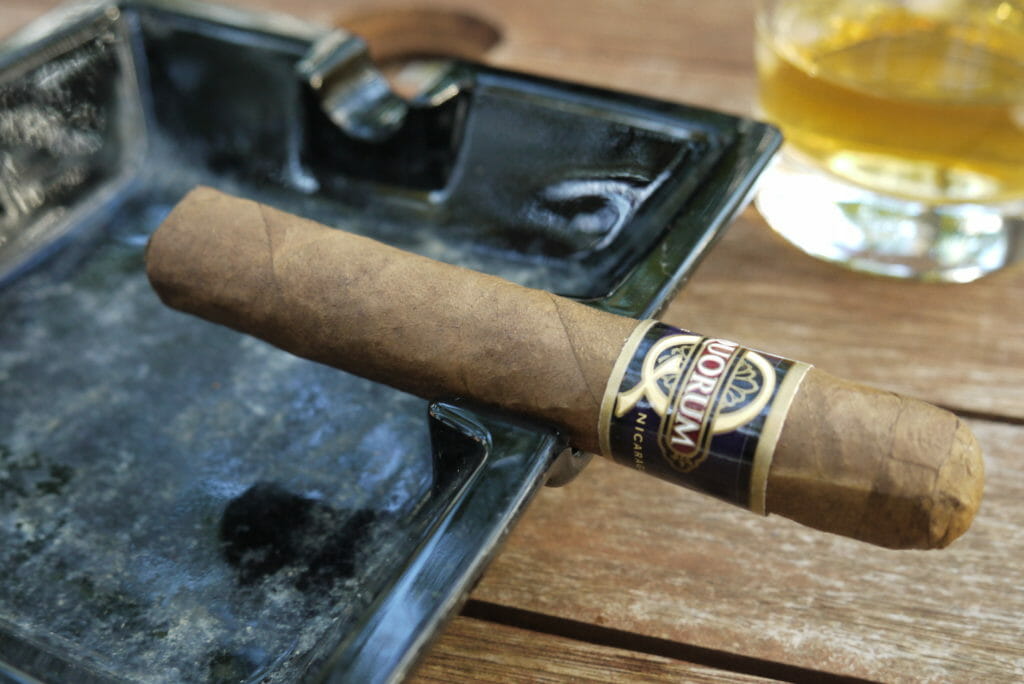 After taking the cigar out of its wrapper my first impression of the smell of the cigar is that it’s reminiscent of the more pleasant notes of a horseback ride. I detected notes of leather and cedar with a deeper musk that I couldn’t necessarily identify. Not the most delicious smelling cigar ever, but at the same time not unpleasant. Drawing on the cigar before lighting it the taste reminded me of the same sensation of opening a cedar chest that’s been sitting in the attic for a few years. That musky aroma of nostalgia and time. 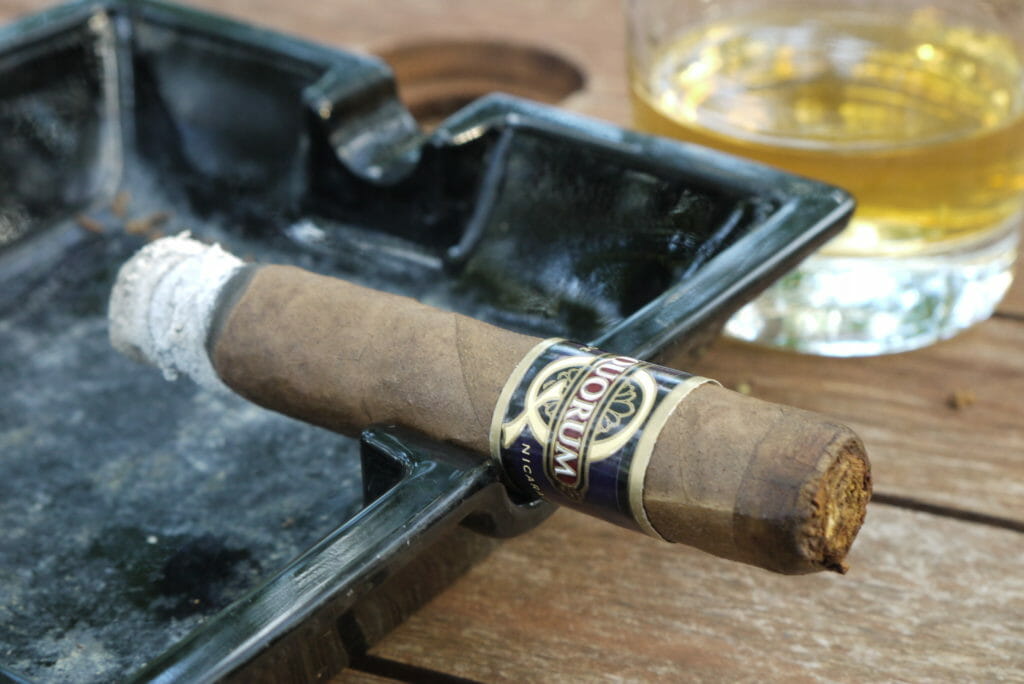 Lighting the cigar was relatively easy. The cigar has a good draw, not too tight but also not too loose. Initially the cigar lives up to its reputation as being medium bodied. The most prominent flavor is that of tobacco (which, given that this is a cigar, isn’t exactly unexpected) with some additional hints of coffee and leather. There’s definitely flavor but not a lot of complexity. 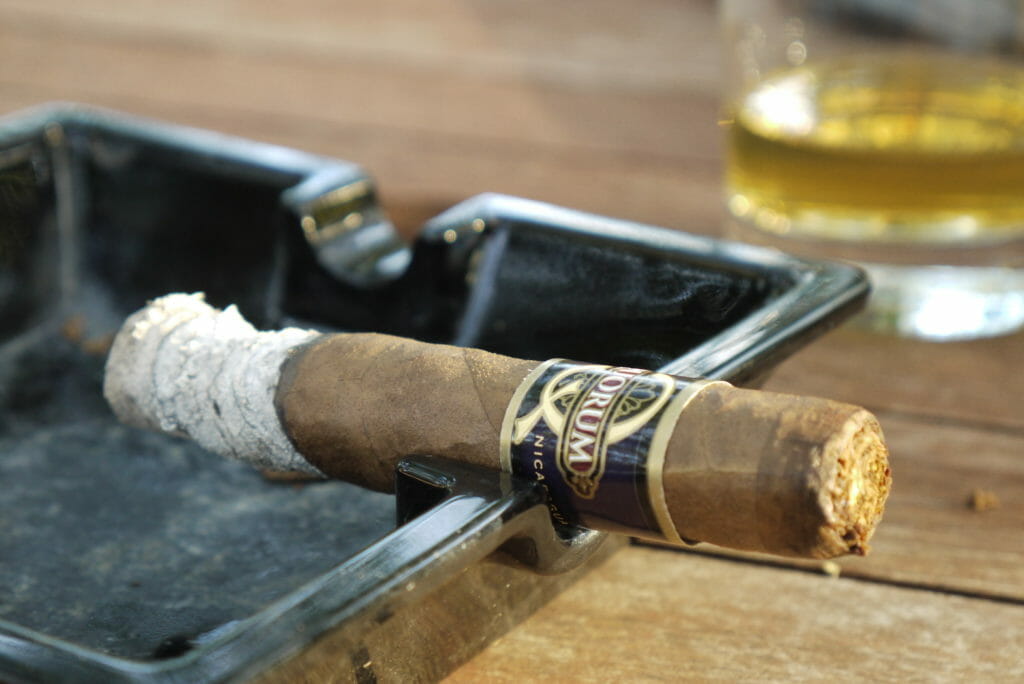 As the cigar burned there were a couple moments where I needed to correct a bit of a canoe, but nothing drastic. Moving into the second half of the cigar, the flavor started getting richer and more complex. Those initial flavors became more intense with some new additional notes of chocolate added to the mix. What I noted the most was the absence of something, specifically the absence of a bitterness that sometimes accompanies the less expensive varieties of cigars. Specifically the cheaper Romeo y Julieta varieties always left a bad taste in my mouth. The Quorum, despite being only 20% the price of the R&J’s, finishes with a smooth richness no matter how quickly you smoke it. As the cigar finished I noted that removing the band from the cigar was remarkably easy. The glue wasn’t dried to the wrapper like some cigars, but instead came away cleanly. 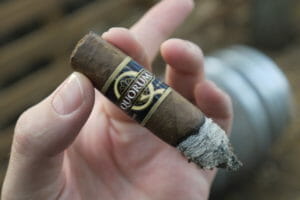 What we have here is nothing special. There’s no amazing flavors, no brilliant branding, nothing to write home about. But there’s also nothing to complain about. For a cigar that you can buy in stores for less than $2, I actually prefer it to brand name sticks at multiple times that price. For those perfect nights where the sun is just setting, you’ve got a good whiskey, and the wife isn’t complaining about the dishes just yet, this isn’t the right cigar. You should probably spend a couple more bucks and have something good. But for those times when you just need a cigar that doesn’t suck this will definitely fit the bill. Overall Rating: 3/5 For those times when you’d really want a Padron, but can’t part with the paper.

We here at Thirty-One Whiskey need to pay the bills and keep the lights on. To do that, some of the links that appear on this website are “affiliate links” where we receive a commission on purchases that you may make. There is no impact on the price you pay, and this system allows us to maintain our impartiality when it comes to the reviews we post.