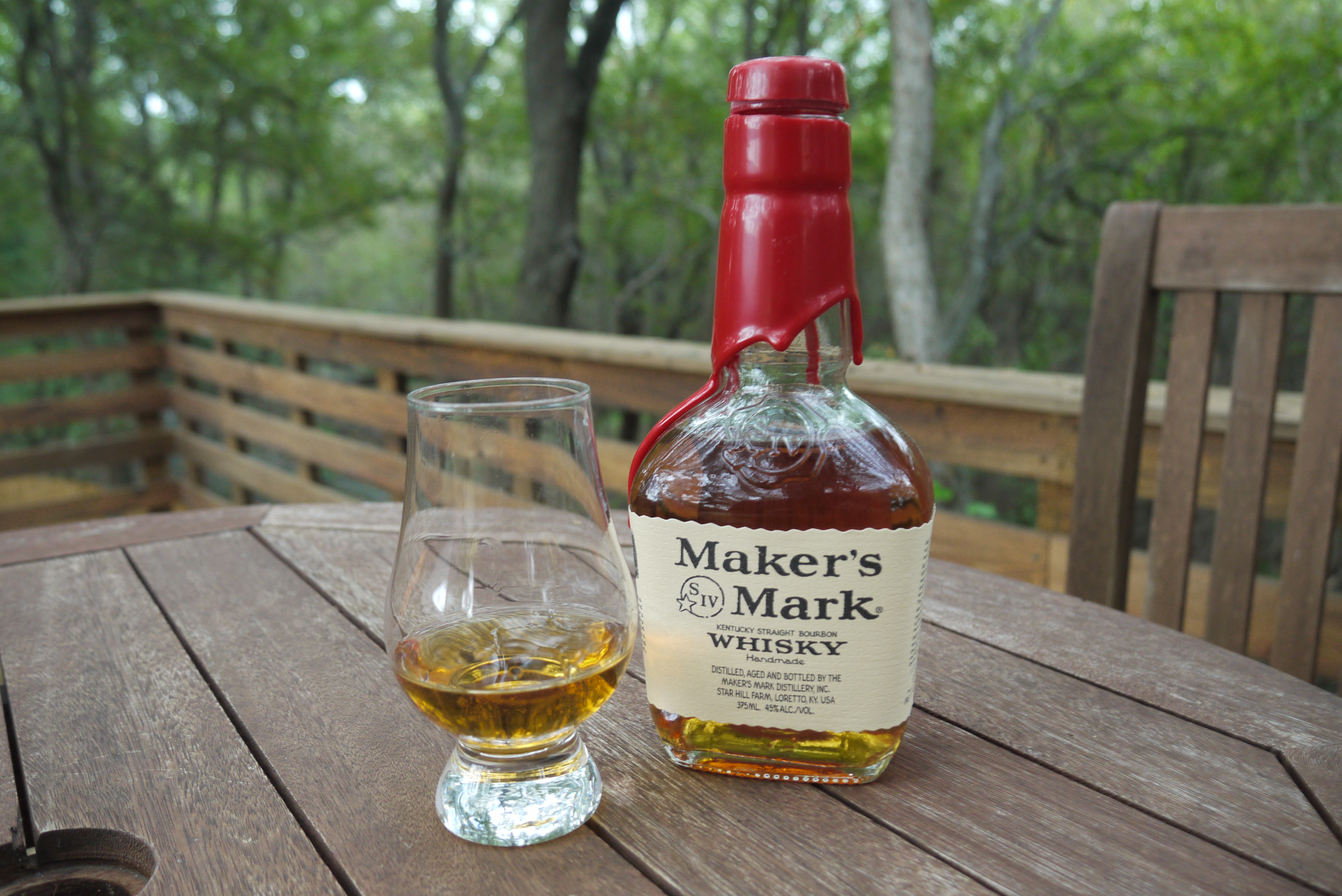 There’s one sure fire way to know my wife’s grandfather has been in the room: an open bottle of Maker’s Mark placed somewhere within arm’s reach of the comfiest chair. Not gunna lie, I kinda want his life. Maker’s Mark has positioned itself as a “premium” whiskey brand meaning that in my formative years I always considered it to be too far outside my price range for consideration, but with that well-traveled man’s endorsement, I decided that it was worth a try.

Maker’s Mark was born in 1953 when T. William “Bill” Sanders Sr. purchased the historic Burk’s Distillery in Loretto, Kentucky for the princely sum of $35,000. Five years later the first batch of bourbon was finally bottled and the spirit has been flowing ever since.

The distillery and its associated brand were sold in 1981 to Hiram Walker & Sons, starting a long line of acquisitions which eventually ended in their current position with Beam Suntory in 2011. The company is the third largest manufacturer of alcoholic beverages, headquartered in Chicago, Illinois (with the holding company located in Osaka, Japan).

Maker’s Mark is interesting among bourbons in that there’s no rye included in the mix of grains. The requisite amount of corn is present and the typical malted barley, but what makes up the remainder of the mix is actually wheat. It’s said that Bill Sanders didn’t have enough time to distill and age each batch to pick a “winner” for his new production line, so instead he made a loaf of bread from each and decided based on which one tasted better. Which gives the wheat content more logical reason.

The grains are fermented using some of the previous batch to kick start the fermentation process, so the yeast fermenting the current batch of Maker’s Mark is always a distant relative of the Maker’s Mark of days gone by. Batches are kept rather small to make sure that the quality can be better controlled.

Once distilled, the spirit is aged in charred oak barrels for around six years — there’s no specific time listed on the bottle because the distillers bottle the bourbon “when it’s ready”, whenever that might be. Something unique for the aging process is that the barrels are regularly rotated from the top of the warehouse (where the temperatures vary much more throughout the day) to the bottom (where temperatures are more stable) which makes for a more consistent batch.

The current production of Maker’s Mark is bottled at the same 45% ABV alcohol content that it’s always had, but there was a stretch there around 2013 where the company lowered the alcohol content to stretch their inventory an extra 6% and make some extra cash. Thankfully, they’ve since reversed that decision.

Maker’s Mark bottles have a distinctive appearance compared to other brands. Legend says that the distinctive bottle design, a squared bottle with a larger base and skinny neck, was influenced by the cognac bottle collection of Bill Sander’s wife.

Starting with that very first run the bottles have sported the trademark (literally) red wax dipped look. Bottles come in a number of different shapes and sizes, including the standard 750 ml offering and are typically capped with a plastic screw-on top. The label is a very light brown color like parchment paper with the brand name and information printed in a stylized black font.

Something interesting to note is that the folks at Maker’s Mark call their concoction a “whisky” with a missing “e”, like the Scottish spelling of the word. Maker’s is one of the only spirits in the United States to spell it this way instead of the more traditionally accepted “whiskey” version.

A glass of Maker’s Mark has a decidedly sweet and warm smell, with hints of vanilla and caramel coming off the glass. It also comes with a significant punch of alcohol that’s likely to singe your nose hairs.

What’s immediately noticeable when you take a sip is that Maker’s Mark is on the lighter side of the intensity profile when it comes to bourbons. Instead of the heavier punch that comes from something like Bulleit, Maker’s Mark is almost closer to a more delicate scotch in the tone of the flavor (which makes the missing “e” understandable). You can definitely taste the oak barrel that it was aged in but there’s also that vanilla coming through, as well as some toffee.

The flavors are most intense at first and taper off as the liquid warms on your tongue. There’s a buttery mouth feel throughout, but once the initial flavor tapers off there’s a slightly bitter finish.

The reason for that more subtle flavor profile is pretty obvious in the grain bill: the missing rye. By using wheat instead of rye the spirit lacks the spiciness and depth that is present in some of the other bourbons on the market.

Maker’s Mark is probably at its best when there’s an ice cube introduced into the mix. With the colder temperature and added dilution all of those flavors are still present, but the slightly bitter finish is almost completely gone.

Be careful to only put in a cube or two — too much ice and the subtle flavors can disappear.

Again, the Maker’s Mark whiskey isn’t that bold. It’s a great sipping whiskey but as soon as you start adding anything to the drink, the flavor becomes completely overwhelmed. In a Maker’s Mark old fashioned, the only thing I could taste was the orange peel and the bitters. Which was pleasant, don’t get me wrong, but when I pay a premium for a brand name whiskey in my drink I really want to be able to taste whatever makes it distinctive. In this case the distinctiveness is completely covered up.

There’s two reasons to use a mixer like ginger beer: either the spirit being used is so appallingly disgusting that it needs to be covered up to be palatable, or the spirit is strong and distinctive enough that it can complement the ginger beer (see: Bulleit Bourbon). In this case, the alcohol is good enough on its own, but too weak to stand up to the ginger beer — the worst of all scenarios.

Personally, I actually miss the rye. That spiciness is what keeps the flavor coming through even in an old fashioned or a mule. The fact that there’s none to be found here means that Maker’s Mark is a delicious sipping whiskey, but should probably not touch anything besides an ice cube.


Overall Rating: 3/5
Definitely a sippable whiskey, but one that gets lost in any mixed drinks.